Uncovering the mycotoxin risk in straw

Click below to listen to the Mycotoxin Matters podcast episode with Dr. Radka Borutova and Per Laustsen, hosted by Nick Adams. You can also hear the full audio or listen to the episode on Apple Podcasts or Spotify.

Harvest 2021 across the key grain-growing regions of the Northern Hemisphere suffered under turbulent weather conditions. Europe experienced a combination of drought in southern regions, while further north, heavy rains and flooding dominated. These rains continued throughout the harvest season, leading to challenges with grain and forage quality, and subsequent mycotoxin contamination.

Each year, Alltech carries out comprehensive mycotoxin testing programs across Europe, the U.S. and Canada that help uncover the mycotoxin threat in newly harvested crops. The results revealed within these surveys are designed to provide accurate mycotoxin risk insights to feed and livestock producers who will be making nutritional decisions during the coming feeding season. For the first time, as part of the European program, a representative sample of wheat and barley straw samples (n = 70) were collected and analysed from Danish farms. Wet weather in Denmark both pre and post – harvest had raised concerns about grain and forage quality there. Delayed and wet harvests, where straw remains in the field for long periods inevitably results in poorer quality straw, in many cases, it is visibly mouldy. Additionally, if straw has been harvested and baled after rainfall, it can be further contaminated by mould spores from the soil. Dark grey moulds may be clearly seen, and the straw can be dusty. However, moulds are not always visible, so it is not safe to assume that if straw looks clean and free of mould, it is free of mycotoxins.

Although not commonly seen as a mycotoxin risk, the results of straw testing at the Alltech 37+ lab show that 84% and 70% of all straw samples were contaminated with deoxynivalenol (DON) and emerging mycotoxins, respectively (Table 1).

Table 1: The occurrence, and maximum and average concentrations of mycotoxins in straw samples collected in Denmark from harvest 2021. 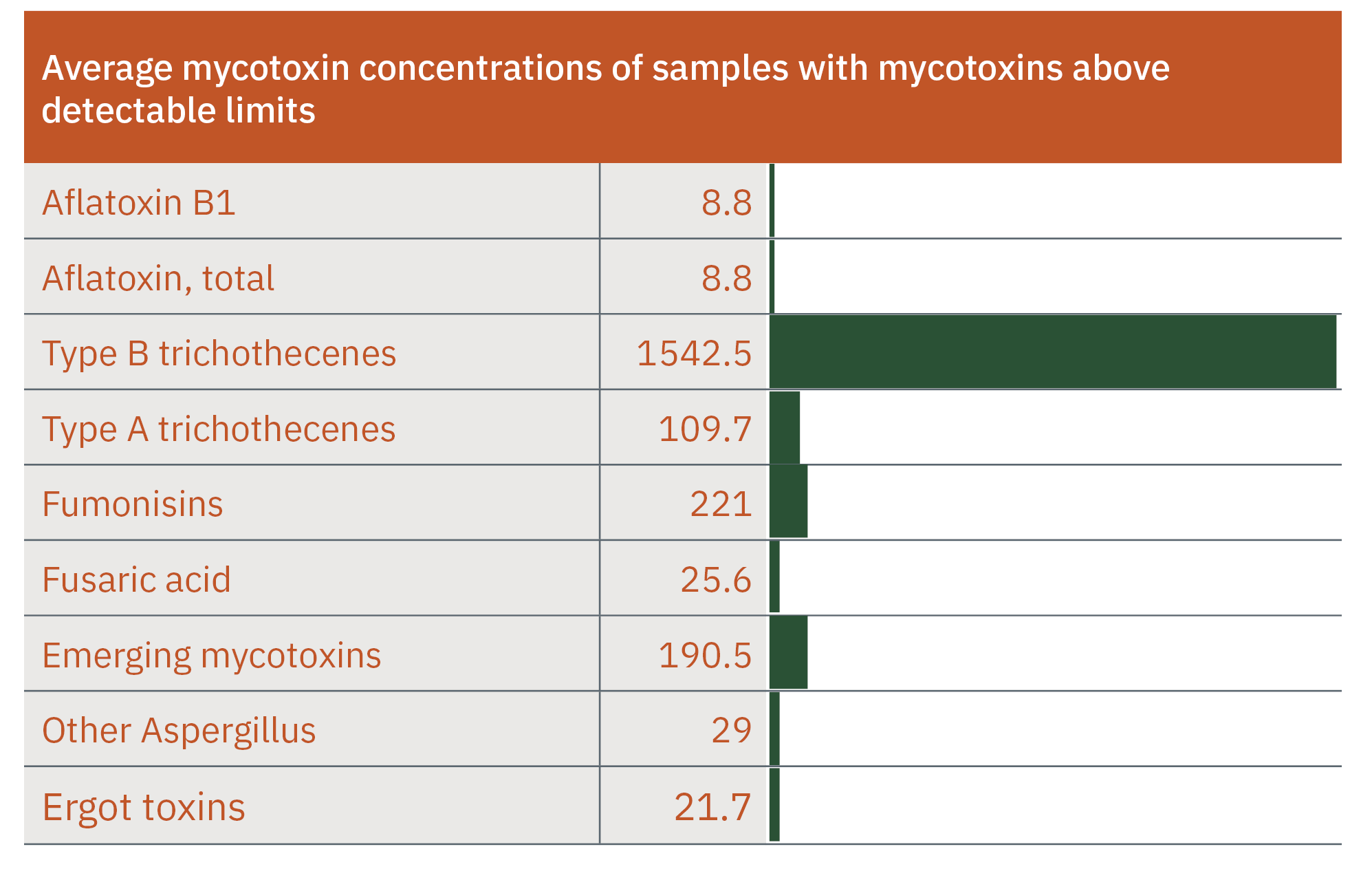 Similar to grain samples, as can be seen in figure 1, the multiple mycotoxin risk is also present in straw, with 3.5 mycotoxins per sample detected on average. Over 95% of samples contained mycotoxins, with over 80% containing 2 or more. The average concentration of DON was 1,542 ppb, with a maximum of 10,914 ppb.

A noticeable trend in recent years is the growing presence of emerging mycotoxins. Of the 70 samples analysed, almost 70% contained this group and included specific mycotoxins such as beauvericin, moniliformin, phomopsin A, alternariol, enniatin A and B.

Fusaric acid also belongs to the emerging mycotoxins group and was detected in almost 22% of samples. It can have synergistic interactions with deoxynivalenol and fumonisins. As a result, the toxicity symptoms of these other mycotoxins may be observed more readily or may be more severe when fusaric acid is present. 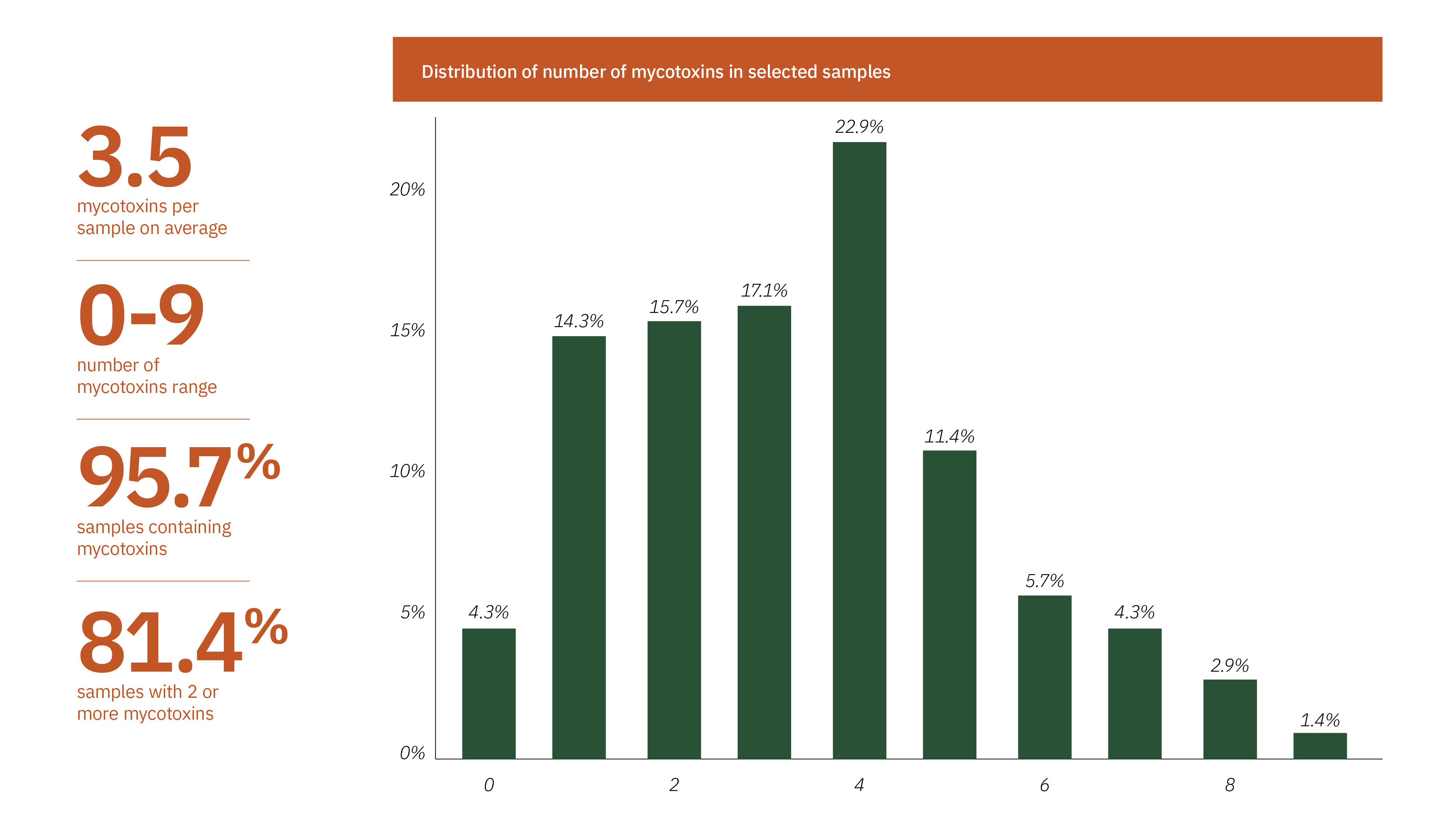 Figure 1: Distribution of number of mycotoxins in straw samples collected in Denmark from harvest 2021.

When Alltech’s Risk Equivalent Quantity (REQ) metric is applied to these results, over 50% of the samples are deemed to be of higher risk for pigs and calves (figure 2)

How can this poor-quality straw impact livestock?

There is limited data on the consumption of straw bedding by pigs. Some data suggests that weaned pigs consume around 1.6 kilograms per day. In sows, approximately 22% of their total feed intake is the straw provided for bedding, though this can increase up to 30% when fresh straw is provided daily (Mansbridge and Stewart, 2012).  Based on the levels of deoxynivalenol found in 2021 straw samples, this could potentially lead to serious negative impacts for animals.

With such high average and maximum DON levels present, and considering European Commission recommendation (2006/576/EC) clearly defines that feeding DON at a concentration higher than 900 ppb to pigs will result in significant effects of this mycotoxin on their health and performance, pig producers must certainly consider the potential mycotoxin risk in straw to livestock health and performance. DON is one of the mycotoxins produced by the Fusarium mould. It belongs to the type B-trichothecene mycotoxins group, a group of 100 compounds with the same basic chemical structure produced by various Fusarium moulds. A common symptom of DON toxin consumption in animals is reduced feed intake. While it is certainly a significant problem, the reality is that the negative effect of trichothecene mycotoxins on livestock is much more complex. Pigs are considered the species most sensitive to DON, with the effects amplified by the presence of fusaric acid (Smith, 1997). Many of the impacts of the trichothecene mycotoxins, such as DON, occur as a result of increased levels of oxidative stress, which is caused by an imbalance of antioxidants.

Fusaric acid is produced by many species of Fusarium mould, such as Fusarium sporotrichiodes, Fusarium oxysporum and Fusarium moniliform. These can produce numerous mycotoxins, including fusaric acid. Fusaric acid appears to be produced at a wide range of temperature and moisture values and may be produced in the field or during storage of feedstuffs. Fusaric acid competes with the amino acid tryptophan at binding sites, which leads to an increase in free tryptophan in the blood. This elevated free tryptophan can enter the brain to increase serotonin production. Fusaric acid also plays a role in lowering blood pressure. Together, these effects can lead to reduced feed intake, vomiting, lethargy and swelling of the legs or mammary glands. These symptoms are often not observed until higher levels are fusaric acid are present in feedstuffs/feeds. Lower levels of fusaric acid do still play a role in mycotoxin risk, however.

Calves are typically offered long fibre roughage (straw or hay) to help develop their stomach and encourage cudding, especially where they are eating a pelleted ration. They also require some dietary fibre to minimise problems with bloat and reduce issues with acidosis, especially with diets formulated with elevated levels of starch. In a survey of commercial farms in Northern Ireland (Morrison et al., 2009) it was found that straw and hay were offered to calves by 59% and 33% of farms respectively. Due to their rumen not being fully developed, calves tend to have low levels of immunity at this young age. With this reduced immunity, levels of DON or any other mycotoxin in straw or hay may have a significant impact on calves’ health and performance, with these impacts at an early age also impacting performance as they transition to productive animals.

In addition to the moulds and mycotoxins that may have developed either pre, or soon after harvest, producers who are using straw should also be aware of the risk being exacerbated, or new mycotoxins developing during storage.  It is common practice to treat new harvest grains with an acid-based preservative, yet this is rarely the case with straw, leaving it with little protection from moulds developing throughout the year. Unfavourable storage conditions, such as storing outdoors under a tarpaulin can cause sweating and condensation further increasing the risk of moulds and mycotoxins developing.

Livestock producers who may be concerned about risk levels in their straw supplies should look to have samples tested for the presence of mycotoxins. Understanding this potential is one of the key first steps in putting in place a mitigation program if necessary, including the use of a mycotoxin binder in the animal’s diet.

To find out more about Alltech’s approach to mycotoxin management, please contact your local Alltech representative or visit knowmycotoxins.com. 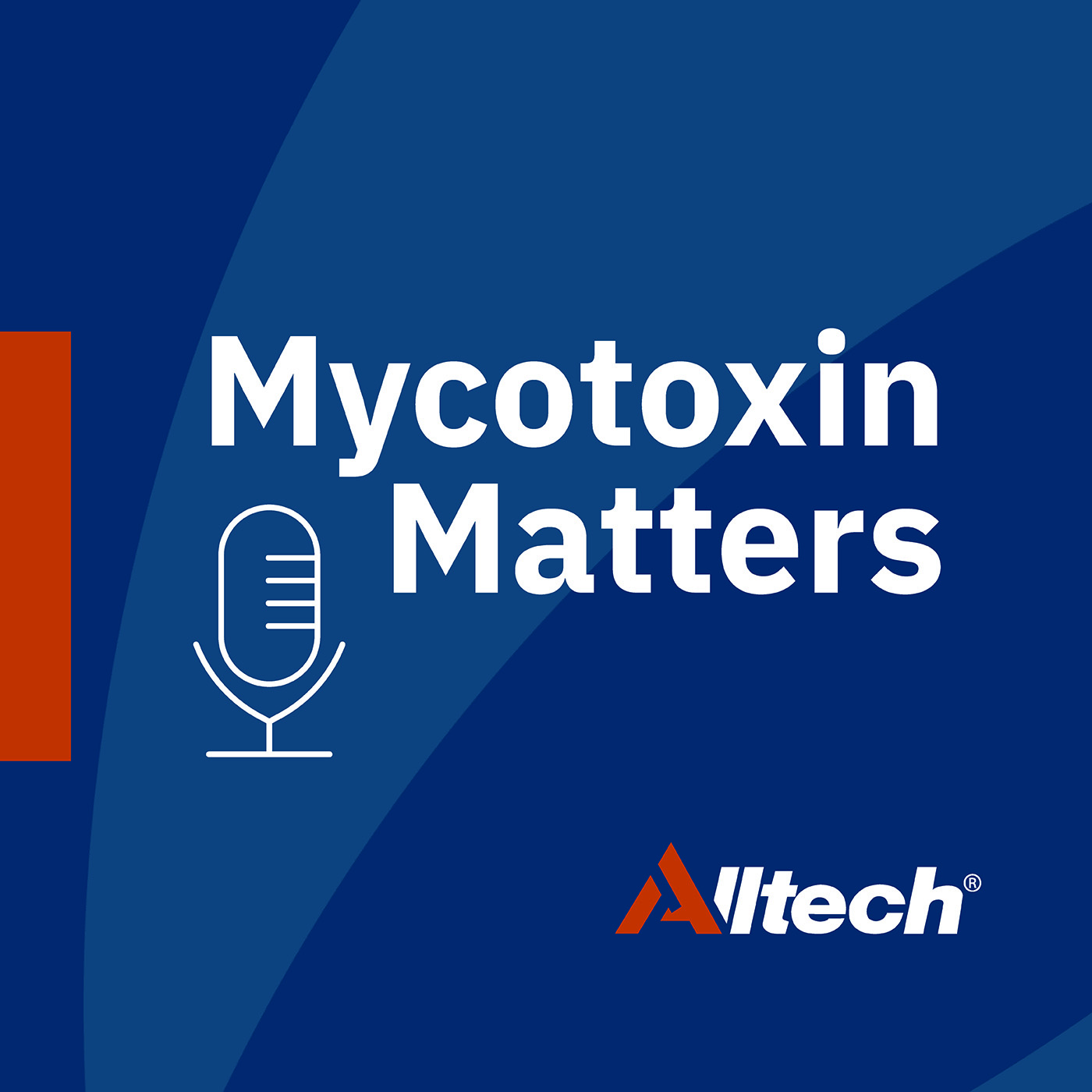