The threat to pigs

Pigs are extremely sensitive to mycotoxins. Both the type and concentration of mycotoxin(s) in feed, and the age and phase of production of the pig determines the degree to which animals are affected. Young pigs and breeding sows/boars are generally the most susceptible to mycotoxins.

Mycotoxin contamination – even at low levels in feed – reduces performance in growing and breeding pigs, affects their immune and health status and even causes deaths. What’s more, irreversible tissue damage can occur that will compromise performance long after mycotoxins have been removed from the feed.

Certain types of feeding and housing systems have increased the need for control of mycotoxicoses in pigs. In addition to the typical risk from dry feed manufactured with contaminated ingredients, liquid or wet feeding systems can also introduce a significant mycotoxin challenge. Pigs are also exposed to mycotoxins in their bedding and the use of straw for welfare reasons in many developing countries has only increased the threat.

The range of mycotoxins affecting pigs

Various mycotoxins cause significant health and performance issues in pigs. These include aflatoxin, ochratoxin, deoxynivalenol, zearalenone, fumonisin, ergot and T-2 toxin. The fungi Aspergillus (and Penicillium), Fusarium spp and Claviceps produce the toxins most detrimental to pigs.

Aflatoxins are of greatest concern in more tropical regions of the world where the climate is generally warm and humid – less so in colder, more temperate countries. Be cautious though if feed is being imported from tropical regions.

Aflatoxins damage DNA, leading to cell death and the formation of tumours. They are the most acutely toxic of all the mycotoxins for pigs, causing extensive liver damage. Feeding pigs diets contaminated with aflatoxin may exacerbate vitamin A and vitamin E deficiency, as well as reduce immune function. This renders the animal more susceptible to concurrent diseases, such as PRRS, PMWS, viral influenza and mycoplasma pneumonia. Secondary infections are also common.

Although pigs may tolerate low concentrations of Aflatoxins, it has been proposed that 50 ppb should be the upper limit to prevent any adverse performance effects. This limit takes account of the possible cumulative or synergistic effects of other mycotoxins affecting the competence of the immune system, and ensures minimal toxic residues in pigmeat.

Pigs are particularly susceptible to Ochratoxins, of which Ochratoxin A is the most significant. Ochratoxins are ubiquitous in both tropical and temperate climates and are commonly found in oats, barley, wheat and maize.

Fumonisins are found wherever corn is grown and they exert their toxic effect by inhibiting lipid synthesis. Very high corn contamination can cause excessive fluid leak into lung tissue, causing pulmonary oedema. Fumonisins can also impact the immune system and adversely affect the liver resulting in jaundice and orange/yellow lesions, which are visible at post mortem.

Clinical signs of DON toxicity also include loss of appetite and immune-suppression.

Zearalenone contamination of cereals (particularly maize) often occurs in warm, humid conditions and in combination with DON. However, it is more likely to occur during storage of the grain rather than in the field with optimal temperatures for Zearalenone production being in the range of 65 – 85F.

Zearalenone is an oestrogenic toxin (i.e. it mimics the action of the hormone) and therefore adversely affects reproductive function.

Clinical signs of zearalenone toxicity include rectal and vaginal prolapses in sows. Nursery and grow finish pigs may exhibit reddening of the vulva and swelling. Irregular oestrus cycles and reduced litter sizes are also commonly observed.

Ergot toxins occur in grains by entering into the seed and developing into a dark elongated body called a sclerotum. This contains toxic alkaloids, such as ergometrine. This reduces the size of blood vessels and restricts the blood supply, particularly to the mammary gland and body extremities. Levels above 1g of sclerotum per kg of feed produce clinical signs of ergot poisoning. Additionally Ergot toxins can impact the secretion of Prolactin, particularly at parturition, which can lead to Aglactia.

Typical signs of ergot poisoning include poor growth rates, rapid breathing and general depression. Newborn piglets are small and weak with a low survival rate. Milk production in lactating sows may be depressed. Lameness may also be evident due to necrosis and sloughing of hooves. Tail and ear necrosis is also common, which eventually leads to gangrene.

Liquid or wet feeding systems can introduce a significant mycotoxin challenge. It is important to employ strict hygiene procedures to minimise the presence of mycotoxins within mixer tanks, feed lines and troughs.

Even with regular cleaning, beware that mycotoxins are extremely resilient and can survive in the bio-films of feed lines and equipment for significant periods. Do not recycle the waste water after the system has been cleaned as this will only re-introduce mycotoxins into the system.

The symptoms can be many and varied, but the outcome in all cases will be reduced performance and lost profits.

Effective mycotoxin management is about seeing the whole challenge, from the farm to feed mill and from risk assessment to feed management. The Alltech Mycotoxin Management Team provide a number of solutions to help you mitigate the threat you could face from field or storage mycotoxins. To find out more click here. 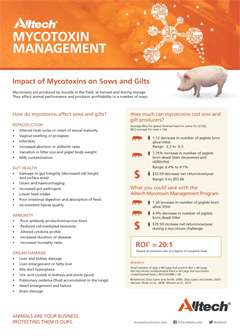