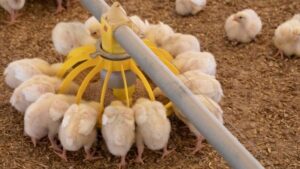 Alltech has released data from a new meta-analysis, published in Poultry Science, that demonstrates the impacts of mycotoxins on broiler productivity and the positive effect of yeast cell wall extract (YCWE, Mycosorb®, Alltech, Inc., KY) supplementation during a mycotoxin challenge on the performance, livability and environmental sustainability of broiler production. The first study of its kind in boiler production, the meta-analysis consists of 25 studies carried out across 11 countries with a total of 10,307 birds.

“Consumption of mycotoxin-contaminated feed by animals can result in reduced farm productivity and profitability due to decreased animal performance and efficiency, increased mortality and greater carbon emissions,” said Dr. Alexandra Weaver, global technical support for the Alltech® Mycotoxin Management team. “However, this meta-analysis confirms that Mycosorb is an effective solution for minimizing mycotoxin effects on broiler performance and health, as well as contributing to lowering the carbon emissions of production.”

The significant (p <0.05) impact of mycotoxins on bird performance and efficiency included:

When included during a mycotoxin challenge, Mycosorb significantly (p <0.05):

Comparing environmental metrics with and without Mycosorb inclusion

A simulated lifecycle assessment applied to a 100,000-bird broiler operation highlighted how Mycosorb can ameliorate the increases in carbon footprint caused by mycotoxins. Compared to the mycotoxin diet, the inclusion of Mycosorb during a mycotoxin challenge resulted in:

Across 100,000 birds, this is a total decrease of 25.41 metric tons CO2-eq, which equates to 30 fewer transatlantic round-trip flights or the annual usage of 17 cars in the UK.

“Testing of grains and feeds continues to highlight the ever-present threat of mycotoxins in animal diets globally, and as this study demonstrates, it is not only impacting animal health and performance but the environmental sustainability of animal production also,” said Nick Adams, global director of the Alltech Mycotoxin Management program. “As the agricultural industry seeks to make advances in reducing its carbon footprint, it is evident that feed additives that improve the productivity of livestock operations are one of the tools that can contribute to achieving these targets.”

This meta-analysis reaffirms that Mycosorb contributes to an increase in total protein output, improvement of profitability and reduction of the carbon footprint of broiler production under mycotoxin challenged conditions. For more information on Mycosorb and the meta-analysis data, visit www.knowmycotoxins.com/mycotoxin-mitigation/mycosorb-a/.