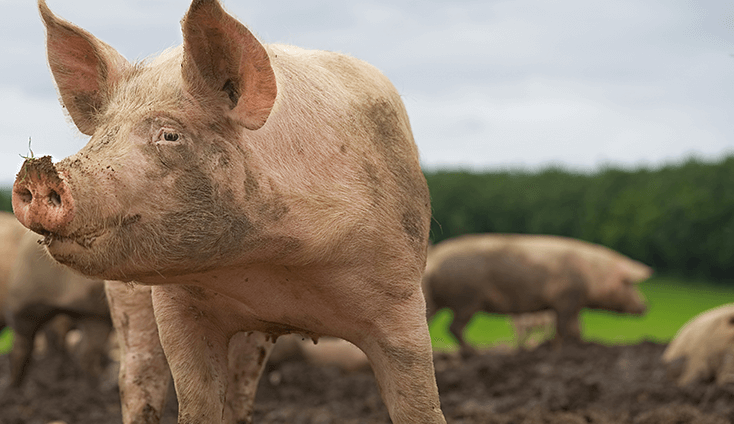 The impact of mycotoxins on swine

Pigs are especially sensitive to mycotoxins, affecting all stages of production. The consumption of mycotoxins can influence performance, damage to the intestinal tract or alter immune function. In turn, compromised immune function may decrease resistance to infectious diseases, reactivate chronic infections and/or reduce the therapeutic efficiency of vaccines and medicines. Exposure to mycotoxins in either a large single dose or in smaller quantities over a more extended period can result in production problems. The pig’s actual response can be dependent on the mycotoxin(s) involved and their concentration, as well as environmental factors such as nutrition, management and health status. Young pigs and the breeding sow are typically the most vulnerable.

The intestinal tract is generally the first organ system to encounter mycotoxins. Damage throughout the small intestine can lead to decreased villus height or increased crypt depth, nutrient malabsorption, intestinal lesions and even hemorrhaging (Maresca, 2013; Alizadeh et al., 2015). Signs of intestinal damage may include scours, diarrhea and loss of body condition.

Several mycotoxins are shown to increase the colonization and severity of intestinal pathogens, such as Salmonella and E. coli (Antonissen et al., 2014; Oswald et al., 2003; Venderbroucke et al., 2011). This is likely due to mycotoxins’ role in damaging the intestinal structure and altering systemic, as well as intestinal-level, immunity.

The immune system is a very dynamic structure within the body. Its proper function is crucial to protecting the pig from challenges that may impact health and performance. Mycotoxins can affect the immune system, with the ability to cause both immune stimulation and immune suppression, depending on mycotoxin type and concentration.

Vaccinations are an important component of maintaining pig health, but mycotoxins can reduce the pig’s capability to mount the antibody response built after vaccination (Taranu et al., 2005). Research shows that the Fusarium mycotoxin deoxynivalenol (DON) can significantly suppress the number of pigs that develop PRRS-specific antibodies after vaccination (Stavard et al., 2015). As a result, pigs may not be protected and could still need additional health treatments, despite being vaccinated. Mycotoxins, such as fumonisins, can also directly increase the occurrence and severity of diseases such as PRRS, leading to more severe symptoms (Ramos et al., 2010).

Breeding sows and gilts, as well as their nursing piglets, may attract additional risk to the immune system from mycotoxins. Parturition is already a time of stress, hormonal and immune changes. Not only can colostrum and milk production be reduced as a result of mycotoxin consumption, but quality may also change. Somatic cell counts can increase along with reduced immunoglobulin levels. This can be measured through lower immunoglobulin levels in piglet serum 12–48 hours after first suckling (Jokovac-Strain et al., 2005; Weaver, 2013). Lower passive immunity from the sows’ colostrum may mean reduced protection from diseases for the piglet.

Whether it is merely a case of reduced feed intake or a combination of the various effects throughout the body, mycotoxins can reduce growth and result in poor feed efficiency in pigs.

A meta-analysis of data from 16 published articles (1,503 pigs), shows that nursery pigs may have an average estimated loss in gain of 40.3 g/day and a three-point increase in FCR during a mycotoxin challenge. This equates to an average Alltech Risk Equivalent Quantity (REQ) of 100. The loss in gain results in a total decrease of 1.6 kg/pig over a 40-day nursery period, which, in turn, may result in an additional 3.2 days required to reach the same market weight as non-challenged pigs.

Furthermore, data from an additional 15 published trials (1,050 pigs) indicates that growing and finishing pigs may have an estimated loss in gain of 38.7 g/day and a three-point increase in FCR during a mycotoxin challenge. The average Alltech REQ comes in at 100. This loss in gain equates to a total decrease of 5.4 kg/pig over a 140-day period, requiring an extra seven days for these pigs to reach the same market weight as non-challenged pigs.

Mycotoxins can impact the breeding performance of swine. In some cases, mycotoxins’ effects on reproductive performance may be caused directly, such as in the case of the estrogen-mimicking mycotoxin zearalenone. In swine, zearalenone symptoms may appear as vulva reddening and swelling, prolapses, altered heat cycles or poor breeding rates. Zearalenone, however, is not the only mycotoxin that impacts reproduction. Trichothecene mycotoxins, such as DON, are also shown to increase the number of stillbirth piglets and reduce the total number born alive (Diaz-Llano and Smith, 2006). Producers may even notice poor litter uniformity.

By tracking production records, swine producers may observe mycotoxin effects on pigs. These can include altered feeding behavior, reduced growth performance, increased diarrhea incidence, poor breeding performance or an increase in the need for health treatments.

If problems associated with mycotoxins are suspected, producers can utilize a range of techniques to minimize a mycotoxin risk. Comprehensive analysis is a good first step for determining the types and concentrations of mycotoxins present in feedstuffs or feeds consumed by the pigs. Analysis may be completed by a variety of techniques, including rapid test strips (Alltech® RAPIREAD™) or by advanced LC-MS/MS technology that can detect the simultaneous presence of 54 different mycotoxins (Alltech 37+®). Furthermore, producers should also consider further reducing the risk to the pig by including a broad-spectrum adsorbent, such as Alltech’s Mycosorb A+®, in the ration.