Mycotoxins: the hidden threat for farmers.

Mycotoxins are secondary metabolites produced by fungus or mold. They are invisible, stable and toxic chemical compounds. Since fungi and molds are ubiquitous, the potential for mycotoxin contamination is ever-present. Fungi will produce mycotoxins when they are under threat from external environmental conditions, such as climatic, biological, aeration, moisture content, temperature and microbial population, among other stress factors. This means that fungi will keep growing and only produce mycotoxins when they are under threat or face stress. Therefore, the presence of fungi does not always mean you will have mycotoxins. However, it does mean you have a higher chance of having mycotoxins. Furthermore, if your sample of feed or grain looks clean and seems to contain no fungus, it does not mean that there are no mycotoxins present. This is simply because the fungi could already be gone, leaving behind these stable mycotoxin contaminants.

How many mycotoxins are there?

Research papers put the number of mycotoxins between 500 and 600, but as scientific instrumentation advances, it is expected that more will be identified. Different types of fungi produce different mycotoxins. Fusarium, for example, which can produce numerous different types of mycotoxins, is a fungus commonly found in the field and soil. Penicillium has more than 350 different species (Visagie et al., 2014), is responsible for penicillic acid, cyclopiazonic acid, etc., and is typically a storage origin fungus that can be transported through the air.

How do mycotoxins differ?

One of the most toxic mycotoxins is the Aflatoxin family. Aflatoxins are known carcinogen mycotoxins and, as such, have lower permitted levels in food products and animal feeds. The European Food and Safety Authority (EFSA) state the maximum aflatoxin level permitted in processed cereal feeds for children and infants is 0.1 µg/kg, and a statutory limit of 20 µg/kg in animal feed.  Whereas deoxynivalenol (DON) has a maximum level of 200 µg/kg in processed cereal feeds for children and infants and “for lactating dairy cows and beef cattle, the estimated mean dietary concentrations to the sum of DON, 3-Ac-DON, 15-Ac-DON and DON-3-glucoside ranged from 64.2 to 996 µg/kg diet” (EFSA CONTAM Panel, 2017). This clearly highlights the huge range of tolerance across two of the more popular and toxic mycotoxins.

The main families of mycotoxins are;

The Alltech 37+® mycotoxin analytical services laboratory can quantify all the previously mentioned mycotoxins, thereby helping farmers and feed mills to stay up to speed on their potential risk.

How do we test for mycotoxins?

We recently posted an article on all the potential methods to test for mycotoxins which can be found here.

The gold standard for mycotoxin testing is LC-MS (Liquid Chromatography-Mass Spectrometry), a technology used in the Alltech 37+ lab.

Provide support with Mycosorb A+®

Mycosorb A+® is a yeast cell wall and algae-based mycotoxin binder that helps to maintain animal health and performance against the risks posed by the presence of mycotoxins in feed. It has a broad spectrum of adsorption due to the large surface areas of the yeast and algae, which increase the sequestration and binding efficacy of mycotoxins. More information about Mycosorb A+ can be found here. 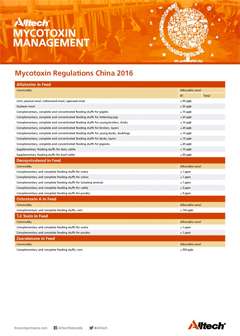